Hello and happy Friday! How are you all doing today? It’s Friday so I’m feeling pretty good myself. The past week has been pretty good but there’s nothing like the weekend.

I’m kicking off the last few hours of work by sharing a few items I’ve been obsessed with this week. Have a great Friday 🙂

The Girl You Left Behind by Jojo Moyes

If you saw yesterday’s post then you probably aren’t surprised that this showed up on the list this week! The novel is about a painting that was done by a French artist of his wife, Sophie. She brings the painting from Paris to her hometown in France during World War I. The town ends up being occupied by Germans. Fast forward to 2006 and a widow, Liv, has the painting in her house. The artist’s family wants the painting back and goes through an organization that specializes in the requisition of stolen or lost works of art.

One of the biggest reasons that I liked this story is because I feel like you mostly hear about stolen works of art form World War II but it happened during WWI as well. Historical fiction is a genre that I love and when the story is interwoven between two time periods I can’t get enough. Jojo Moyes is also the author of Me Before You so if you enjoyed that popular book then I recommend checking this one out as well! 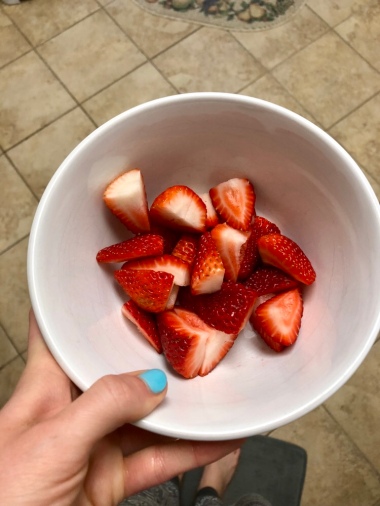 A week or so ago, I noticed strawberries were on sale at the grocery store so I picked them up just hoping they would be ripe. I have no idea when strawberry season is but I think it’s now because the berries I’ve been buying are delicious! For a midmorning snack at work, I’ve been cutting up a few strawberries and putting them in a container. 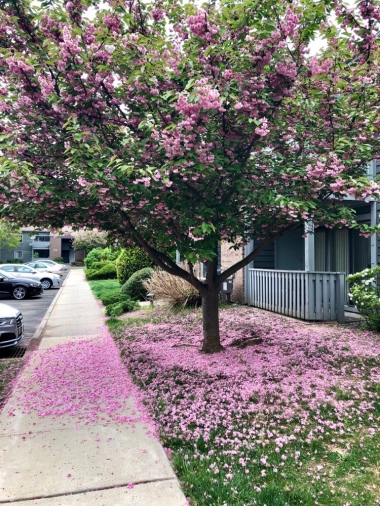 I have no idea what type of tree this is to be honest but I love the pop of pink it adds to everything! These trees are all over our apartment complex which makes walks and runs fun. It’s not just these trees though, when I drive I see other flowers blooming. It’s been putting a big smile on my face because it means spring is officially here!

Question of the day: What’s one thing you’ve been obsessed with this week?