Hi friends! I hope you had a nice Monday and your week is off a good note. I’m checking in a little tired today but nothing some tea won’t fix. Have a great day 🙂 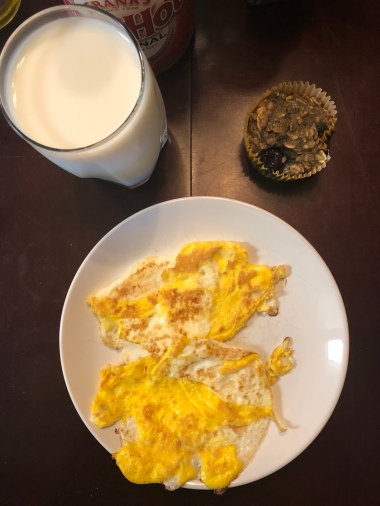 After a long weekend, I was tired Monday morning. Luckily (or maybe I should say unluckily), having a job forced me to get out of bed to start the day. A breakfast of eggs and a muffin was consumed before heading off to work. 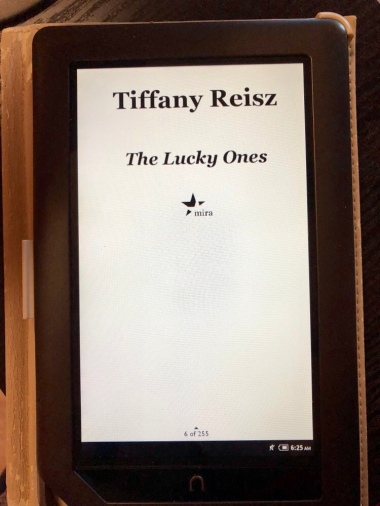 During my lunch break, I started my next book. The Lucky Ones by Tiffany Reisz is the story of Allison. She was one of seven orphaned or abandoned children that were taken in by the brain surgeon and philanthropist, Dr. Capello. Her life was almost perfect until she almost died one night and then taken in by her elderly great aunt. 13 years later, she receives a note from Dr. Capello’s oldest son explaining the doctor has just weeks to live. That’s as far as I’ve gotten so far and I’m hooked! 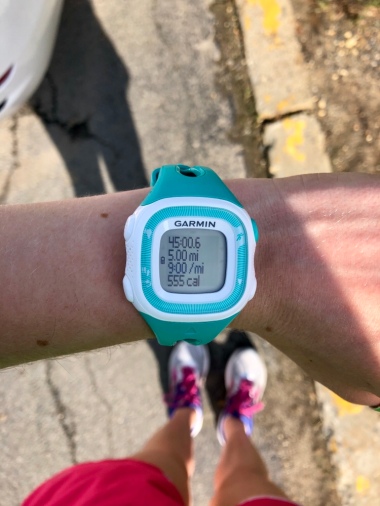 When work ended, I headed home to change and quickly got my run going. It was a tough one but exactly what I needed in order to jump start the week. After a mile warm up, the next 3 miles were 2 minutes at 5k pace followed by 2 minutes at half marathon pace with a mile cool down. Once it was done, I grabbed my resistance bands to work on legs. It was tough and my legs were feeling all of it at the end. A long foam rolling session was necessary after some stretching. 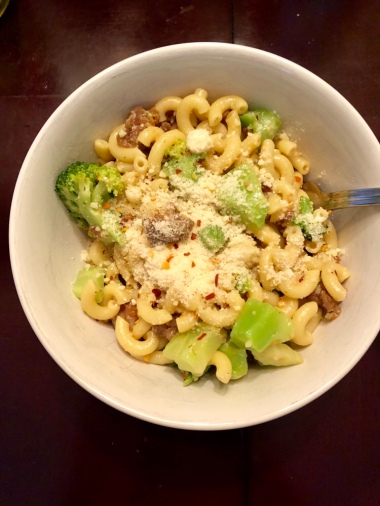 The next little bit was spent doing some housekeeping before it was time to make dinner. Alex and I went back to one of our old favorite dishes. We haven’t had the broccoli and sausage cavatelli (or whatever shape of noddle I have on hand) pasta in so long. It hit the spot!! This recipe is one that my Dad found on AllRecipes.com years ago. I’ve made it so often I don’t even need to look at the recipe any more.

We finished watching American Made before calling it a night and heading to bed.

Question of the day: What’s a dish you’ve made so many times you don’t even need to look at the recipe?

Happy Monday! How was your weekend? Ours was spent at Tucker and Allison’s wedding, Alex’s brother and new sister-in-law. It was a fun weekend but late nights so we were ready to be home yesterday.

In typical Monday fashion, we’re taking a peek into my Sunday through some pictures. Have a great day 🙂 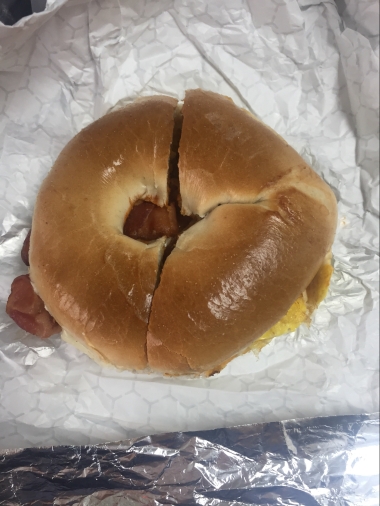 Instead of eating at the Airbnb we stayed at, we opted to head home early and grab breakfast sandwiches from our favorite place near home. A bacon, egg and cheese was a welcome sight! 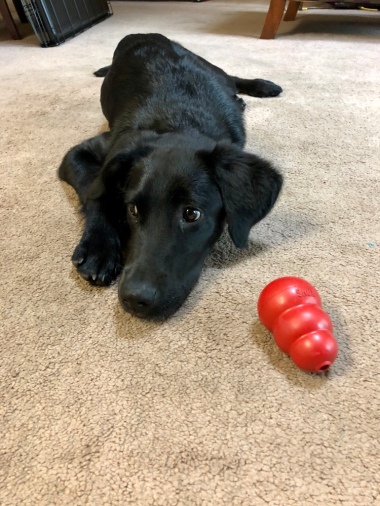 Picked up Bailey who we missed the past two days. 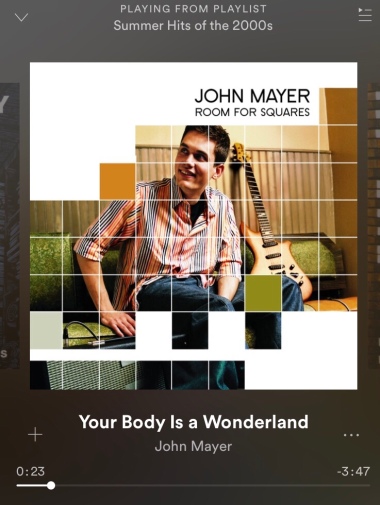 The song of choice while heading to the grocery store. 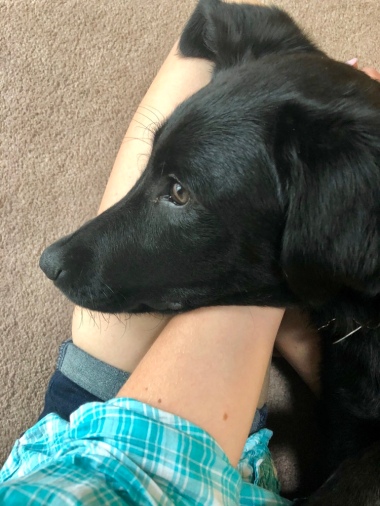 Someone did want to be far from us for a while… 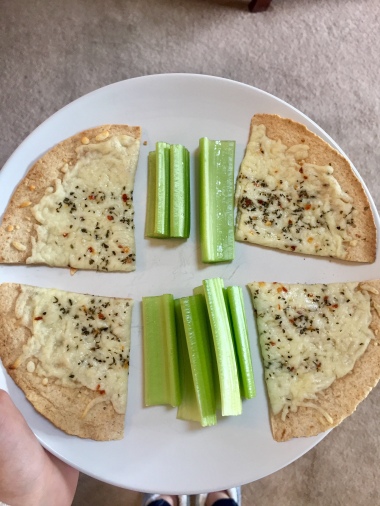 A tortilla pizza and some veggies for lunch. 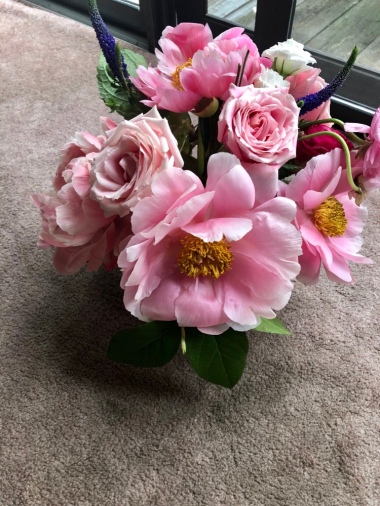 Free flowers are the best flowers. 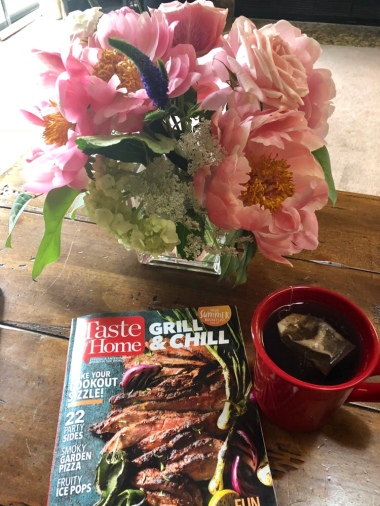 Some tea and magazine reading while it rained outside. 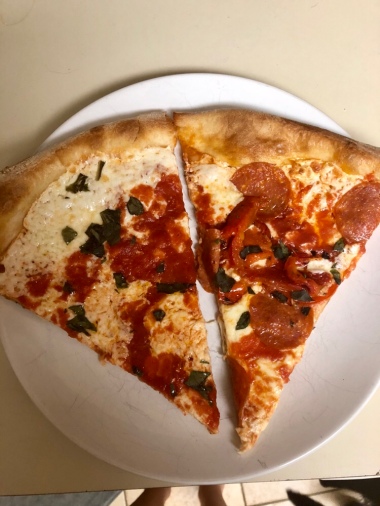 Pizza for dinner because pizza is always a good idea.

To finish our lazy Sunday, we watched a little over half of American Made.

Question of the day: What’s one highlight from your weekend?

Hi friends! It’s Thursday which means we’re one day closer to the weekend. So far the week has been a good one and the heat and humidity hasn’t been a factor which is nice after what felt like two weeks of never ending humidity. I have my long run this afternoon so I’m hoping the clouds stay put to keep the sun away. Have a great day 🙂

Wednesday started out nice and early when my alarm went off. When I went to bed Tuesday night, it was raining and we left our window open in the bedroom to listen to it. The smell after rain is honestly so refreshing so waking up to it was a nice treat. After getting ready for the day, it was time for breakfast. Scrambled eggs and a muffin always save the day by making mornings so easy. 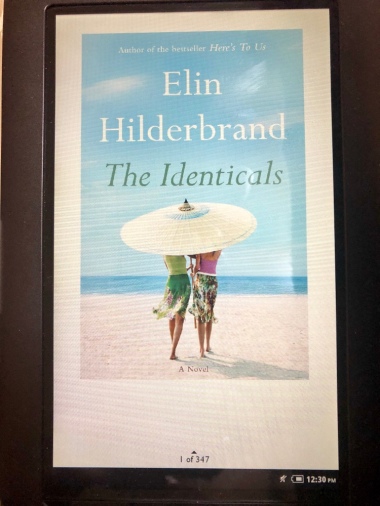 During lunch at work, I popped open my Nook to read more of The Identicals by Elin Hilderbrand. It’s the story of identical twins, Tabitha and Harper, whose parents divorce when they are in college. Tabitha goes with their mother, Eleanor, on Nantucket while Harper goes with their father, Billy, to Martha’s Vineyard. After 14 years of not speaking to each other, despite the islands being 11 miles apart, the twins are brought back together due to Billy’s passing. They decide to spend the summer on opposite islands. So far I’m enjoying the book and I may have an idea of how it’s going to end. It’s a great summer read if anyone is in the market for a book! 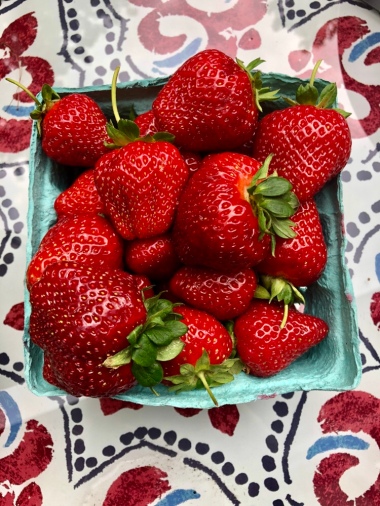 After work, I decided to head to the farm stand that I drive by every day to pick up some strawberries. I had finished all the fruit I bought at the grocery store and decided to see how the farm’s selection was. I walked away with a big container of the most juicy and delicious strawberries I think I’ve ever had. If I didn’t stop myself, I could have eaten the whole container. When Alex got home from his run, we leashed Bailey up and headed for a walk before reading on the couch before dinner. 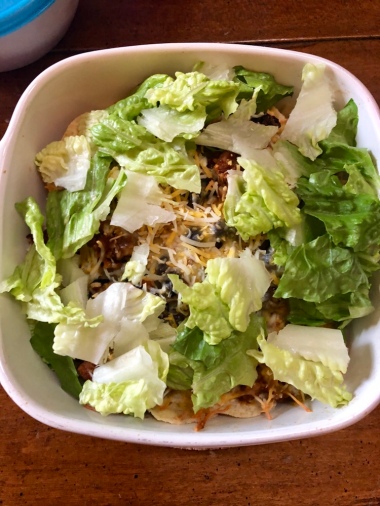 Dinner was leftovers last night. We had leftover beans and turkey from tacos on Tuesday night so I decided to make some loaded nachos. They turned out so well! I layered chips with the beans, meat and cheese before popping it in the oven to melt the cheese and warm it all up. When it was ready, I topped it with a bunch of lettuce and dipped it in salsa. It was amazing! Alex had leftover Pad Thai but was still hungry since there wasn’t too much left. After eyeing my dinner, he decided to use the remaining little bit of beans and turkey to make nachos to fill him up.

The rest of the night was relaxing and I read some more. We ended the night cuddled up watching The Office before drifting off to sleep.

Question of the day: Loaded nachos – yes or no? Some people don’t like them!

Hi friends! The sun ended up coming out yesterday which did wonders for my mood Getting some Vitamin D on a Monday is good for the soul. A doctor somewhere probably agrees with me on it too 😉 Monday started off on a slightly startling note so let’s just get into it shall we? Have a great day! 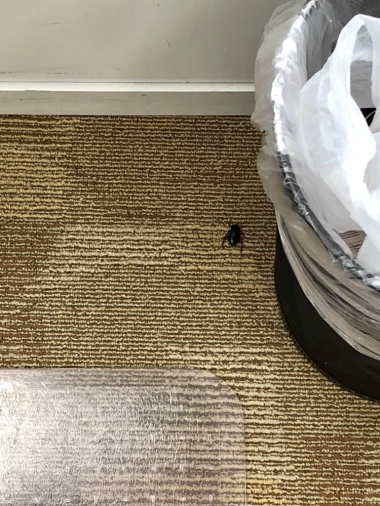 I bet you thought you would see a picture of my typical breakfast but surprise! After a routine morning I went to work and when I turned the little cubicle wall to my desk I saw something near the garbage can. When I saw I almost screamed, I wish that was a joke. I’m not a bug person and at first I thought it was a cockroach but after my heart stopped racing I realized it was just a beetle. Since bugs and I do not get along, I just took the garbage can that I share with the person next to move and moved it over the bug. Out of sight, out of mind was the motto for the day… 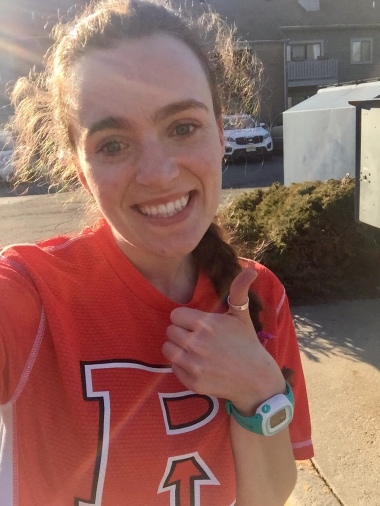 The rest of work was pretty calm and no more surprises which is always a good time. When I got home, I changed into my running clothes and headed out the door. The humidity finally went down so it was actually enjoyable to run outside without dying. After 3 miles and some strides, Bailey and I leashed up to go for a walk. Home girl did not feel like walking far though… We’re working on it though! 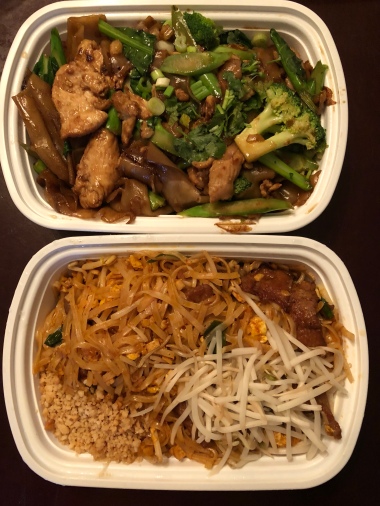 Once we were all cleaned up and in pjs (after an emergency grocery store run) it was time for dinner. We heated up leftover Thai from Saturday night. I had the rest of my Pad Sew and a little bit of the Pad Thai that they originally thought I ordered. I wasn’t a huge fan of whatever sauce was on the Pad Thai to be honest with you and probably wouldn’t order it in the future. 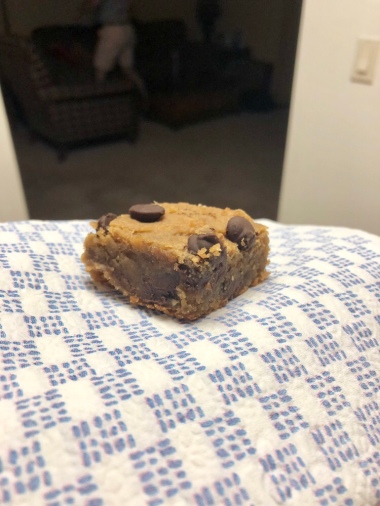 After dinner, I FaceTimed my friend Sarah and then settled in on the couch with Alex to finish The King’s Speech. My sweet tooth was screaming so I grabbed a blondie that I made Sunday to eat during the last little bit of the movie. It was really good! Colin Firth was amazing and I can understand why he one an Oscar for his role at King George VI. When the movie ended, I got ready and headed off to bed.

Question of the day: Are you a bug person?

Happy Monday! It’s a tad dreary this morning but I have my fingers crossed the sun will peak through later in the day. I hope you all had a wonderful weekend! Saturday was filled with some shopping and ended with an amazing movie. Sunday had some relaxing in it and ended with dinner with a friend who is moving. Overall it was a good weekend.

In typical Monday fashion around here, I’m sharing my Sunday through pictures. Have a great day 🙂 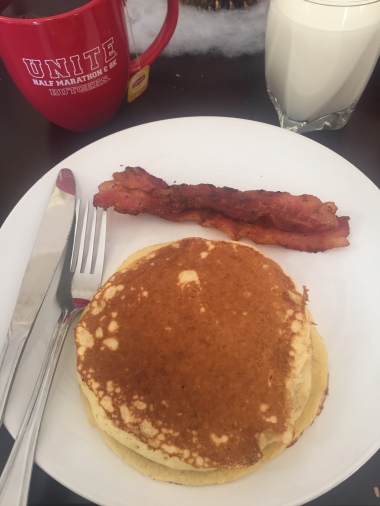 Sunday started off with some pancakes and bacon for breakfast. 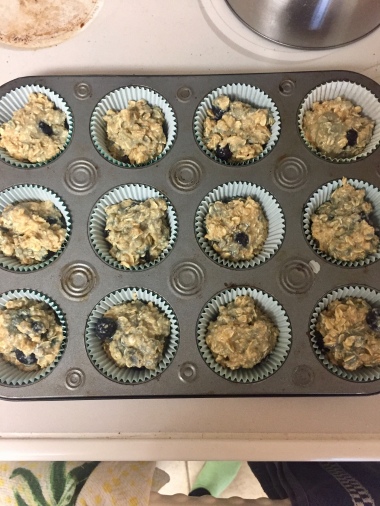 I baked another batch of oatmeal muffins (I tweak this recipe) while listening to the Mamma Mia! soundtrack. 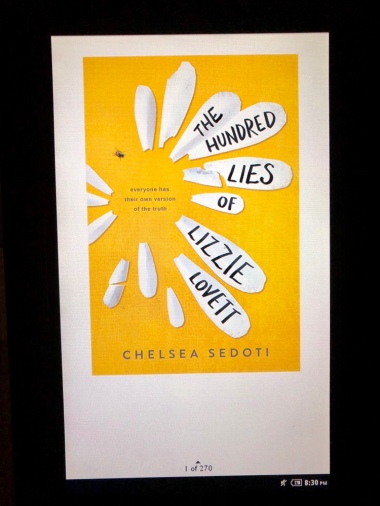 While the muffins cooled, I finished The Hundred Lies of Lizzie Lovett. It would be a good pool read I think since it’s not intense and a cute story. 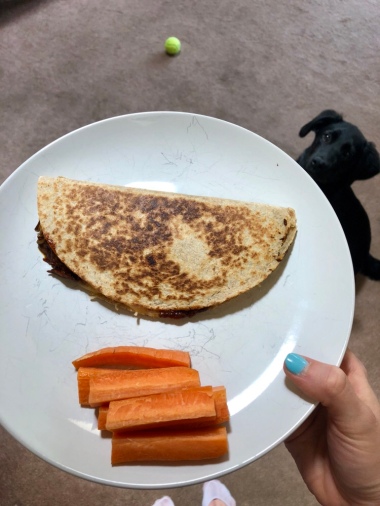 For lunch, I made a quesadilla with leftover beans and chicken plus some carrots and hummus.

My next book is called The Identicals by Elin Hilderbrand. It’s about identical twins who live on Nantucket and Martha’s Vineyard but don’t speak even though they live so close. I think it’ll be a good summer read! 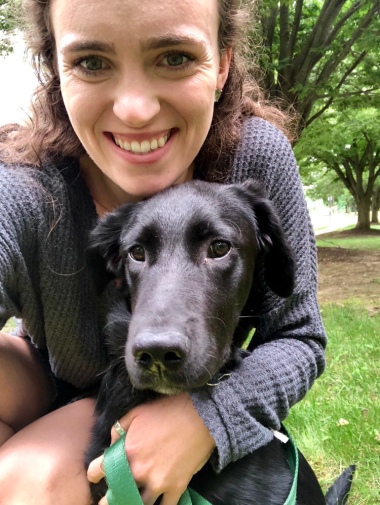 Bailey and I went on our longest walk to date. She wants everyone to know that tow trucks are a little scary but if you sit down to watch them back up while it beeps, then they aren’t as scary 😉 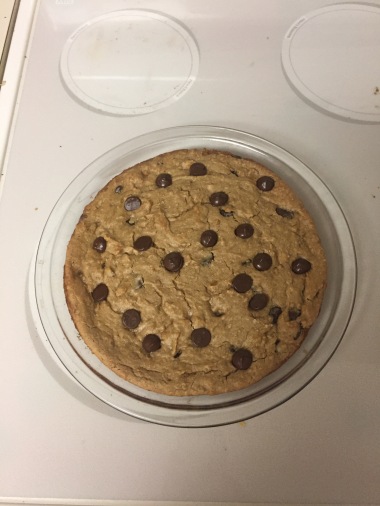 I made a batch of peanut butter chickpea blondies from Joy Food Sunshine. They smelled SO good while they baked.

We watched part of The King’ Speech. 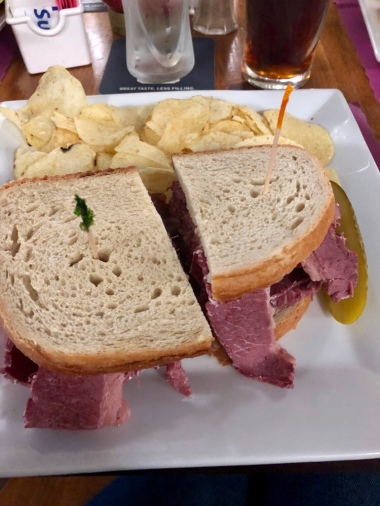 Then Alex and I headed to Somerville, New Jersey to meet my friend Greg who is moving at the end of the month. We grabbed dinner at an Irish pub (everything was oddly closed along Main St.) but my corned beef sandwich hit the spot!

Question of the day: What was a highlight from your weekend?