Good morning everyone! I hope you had a great Monday. I’m just going to jump right in this morning. Have a great day 🙂

My Dad jokingly made fun of the fact that I have scrambled eggs all the time when I called him for Father’s Day. So naturally I had fried eggs for breakfast actually. Then instead of my usual muffin, I had toast. That was solely due to the fact that I was too lazy to take them out of the freezer and stick them in the fridge on Sunday night. 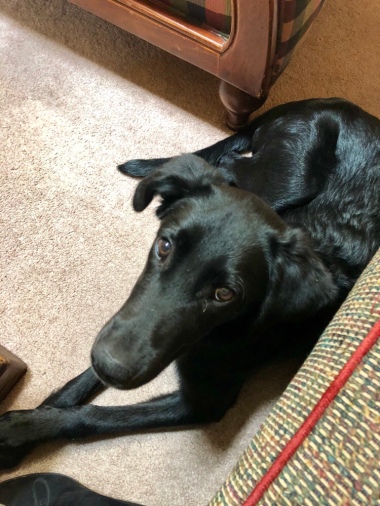 Alex ended up working from home last minute yesterday so lunch was the two of us and Bailey. I think our little pup was a little confused since we are rarely both home for lunch during the week. It was the perfect midday treat to start off the week.

During lunch, I decided to pack a gym bag with my running clothes. I had to do some hills and decided to try one that I remember from the 5k I did back in September. The town we live in is pretty flat and I didn’t feel like dealing with rush hour traffic to get to a hillier town nearby. Luckily the hill was as I remembered it and worked perfectly. Y’all…it was so dang hot out!! I had 2 easy miles for a warm up and I was so sweaty just from that. Hills are hard enough but man it was hot and humid out. I ended the day with 6 total miles.

After laying in the grass for a few minutes outside Alex’s parents house, I hopped in the car and ran to Costco quickly before heading home. When I got home, I grabbed a much needed shower before starting dinner. We had turkey tacos which hit the spot after that workout. We watched some Billions after eating.

Later on, my sweet tooth starting calling for the ice cream that was in the freezer. When we went to Alex’s coworkers house on Saturday, his oldest daughter asked for chocolate ice cream for dessert. I used this recipe and only added 2-3 tablespoons on cocoa powder. The tub was almost done so after I measured the first tablespoon I just dumped the rest in haha. Making this ice cream was incredibly easy and it tastes amazing. In the bowl, I put some strawberries and a few sprinkles because I can 😉 We watched an episode of The Office and headed to bed.

Question of the day: Is it hot and humid near you?